skip to main | skip to sidebar

I feel sure that if someone would send me to the woods for a week, I would come out a very different painter. Partly due to being at one with nature; partly, because I’d be taking with me a new pair of eyes. I don’t spend a lot of time in the woods so my surroundings would be mostly new to me. When we see the same things over and over again, we begin not to see them. We become familiar with them, but tend to stop seeing their nuances. It was almost impossible for me to name this little painting. The building in the background is anything but obscure by way of architectural achievement. It’s the new Education Center that opened in 2009 at the North Carolina Botanical Garden, mentioned yesterday. It is the first state-owned building in North Carolina to have achieved LEED* Platinum Status. Perhaps it’s appropriate that I depicted it in a supportive role to its environment. The tall pines you see in the painting are North Carolina’s famed longleaf pines. Other than the University of North Carolina sports teams, ever heard of Tar Heels? Two of the byproducts of the longleaf pine are tar and turpentine. Workers in close proximity to these trees picked up tar on their heels and came to be known as Tarheels; North Carolina, the Tarheel State — just a little trivia for you today.* Leadership in Energy & Environmental Design
Posted by Unknown 6:55 am Friday, February 18, 2011 No comments:

Back on the trail

My first date with my late husband included an afternoon at a State Park near Faribault, MN. When I asked him the names of particular wild flowers, he couldn’t tell me. “If I was from Minnesota, I would know them,” I responded. I wasn’t being nasty; I simply spoke the truth. Moving around all my growing up years as a “military brat” involved getting to know new regions and their vegetation. We picked blackberries in England, mangoes in the Philippines. I think my mother was responsible for instilling in my brother and me, a true appreciation of nature and its wondrous beauty.

I spent the day last Monday observing, appreciating, and painting a few of the glorious sights offered by nature at the North Carolina Botanical Garden in Chapel Hill. With the prospect of a show next year in the new Education Center’s art gallery, I was given a quick private tour of the Center’s Display Gardens. Afterward, I headed down one of the Piedmont Nature Trails where I found many striking Sycamore trees, naked in winter with veins of white bark exposed on their upper trunks and limbs.

I had never heard of Steampunk fashion until I attended “My Broken Valentine”, another Dr. Sketchy session, this one in Pittsboro, NC. We met at a place called Davenport & Winkleperry, a coffeehouse and art gallery, both under the same roof. I admit, I had to google steampunk clothing when one of the Sketchy sketchers referred to cupid here as a “steampunked model”. Being an artist, it’s pretty easy to check out what the younger generation is up to. Behind one’s sketchbook, no one recognizes you as an imposter. I’m sure they view me as a child of the sixties, a pretty accurate assessment.
The sketch in color was a ten-minute pose, much too lengthy, as with the model’s back to me, there wasn’t a whole lot to draw. The black and white sketches above, all watercolors, were one-minute poses.
Posted by Unknown 6:55 am Tuesday, February 15, 2011 1 comment:


Trapezio was the name of last Saturday’s Dr. Sketchy session in Raleigh. Attendees were provided with two female models who posed for us on trapeze in several one-minute poses, then some five, and finally a ten. These are my favorite of my one-minute sketches. Trapeze is a wonderful way to view the figure in ways one wouldn’t normally view it. Great sketch practice. In positions that might otherwise be impossible, a model on trapeze requires an artist to draw what they see, not what they know. Paint what you see, not what you know has quickly become one of my favorite drawing / painting mantras.I’m not certain my last blog post went out to subscribers. If you did not receive the January 29 post, you’ll find it posted below or by clicking here.
Posted by Unknown 6:55 am Friday, February 04, 2011 No comments:

Would you like to get my latest painting emailed to you? Please enter your email address: 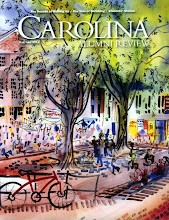 cover art is a detail of ”Midday at the Pit”